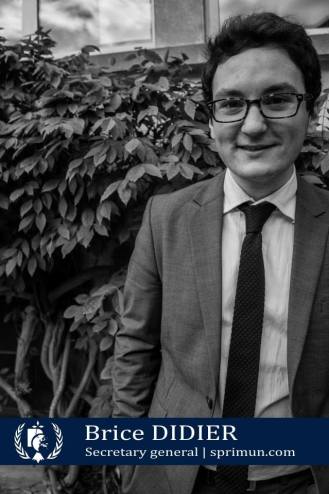 Studying European and International Affairs, with a major in economics, Brice just came back from his third year abroad. He first did an 8-month internship in the French cultural diplomacy area in San Francisco, before a second internship of six months in Amsterdam, where he worked in the French Embassy in the Netherlands, within the team of the Invest in France Agency. His interest in diplomatic issues led him to integrate the MUN Association of Sciences Po Rennes (BATNA) in 2011 and to participate in several MUNs, including the London International MUN 2012 and the Oxford International MUN 2013.

As SPRIMUN’s Secretary General, Brice hopes to build the 2014 conference on the success from last year, and has for main goal to ensure that all participants enjoy a stimulating MUN. If you are planning to attend or have any queries, Brice and his team will answer all your questions. We look forward to hearing from you! 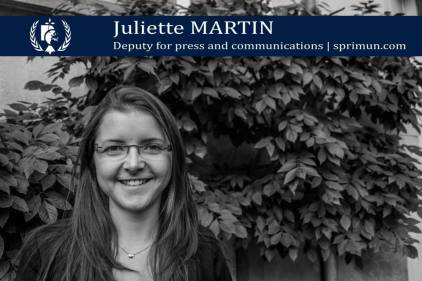 Juliette is a student at Sciences Po Rennes since 2010. During her third year abroad, she did a 7-month internship as a journalist at the United Nations in New York, for the news agency IPS. She also did a 2-month internship at the Directorate of Communications of the Council of Europe, in Strasbourg. These two internships, as well as her choice to study “European and International Affairs” for the first year of her Master’s degree, prove her strong interest in international relations and journalism.

She registered to be the 2014 SPRIMUN Deputy for press and communications.

Xavier is a 23 year old multicultural student of Science Po Rennes. He is currently in 4th year studying public affairs. Arriving at Science Po in 2010 he rapidly decided to participate in the many internal simulations of the school. After learning the basics, he decided to go international!

For the SPRIMUN, Xavier will be the USG for Personnel. He will structure the committees to make them as exciting and productive as possible. He will also be in charge of selecting and training the chairs. 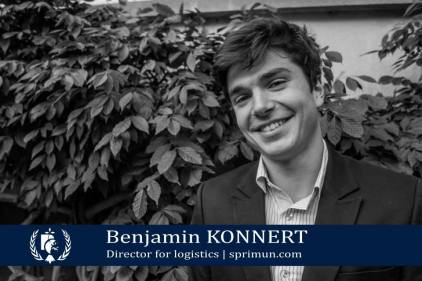 Benjamin is an undergraduate at Sciences Po Rennes since 2012. During his first year of studies, he attended the 14th LIMUN conference and the first SPRIMUN conference.

Eager to pursue a career in international development and trade, he became the President of the association BATNA that aims at giving a first experience of United Nations negotiations to Sciences Po Rennes students by organizing simulations as well as encouraging their participation in European MUN conferences. This year, the association’s members will take part in the ScotMUN and the PragueMUN conferences.

As the director for logistics of the SPRIMUN he is in charge of the main organizational tasks of the event. 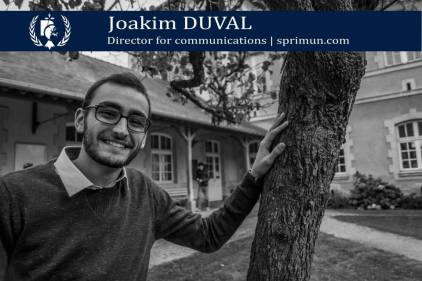 Joakim is a student at Sciences Po Rennes since 2012. During his first year, he discovered the MUN world. He participated in the 2012 London International Model United Nations but also in the first edition of the SPRIMUN, where he was awarded the “Best Delegate” award in the Security Council.

Very interested in diplomacy and international affairs, he became BATNA’s Vice-President (a MUN-training association) and gladly accepted to be the 2014 SPRIMUN Director of Communications. He will also attend the 2014 PRAGMUN.

Thus, he will be available for any questions about the SPRIMUN website or for any further information concerning this event. 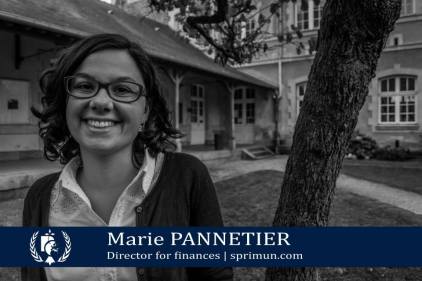 Second year student in Sciences Po and studying Public Law, Marie already participated in the 2013 SPRIMUN, as the runner of the General Assembly. She also attended the Limun 2013, representing Canada in the UN Women committee.

Interested in diplomacy and international relations, she decided to be part of the association Batna, which organizes MUN trainings, as one of the treasurers.

For the SPRIMUN, Marie will be the Director for Finance, managing the budget and taking care of the financial part of the conference. 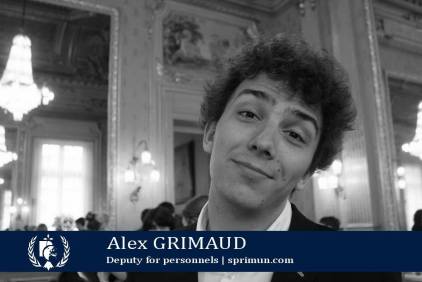 Alex is a 2nd year student at Sciences-Po Rennes. Studying economics and management, he is also very interested in international relations. That is why, he took part in the LIMUN and the SPRIMUN 2013, representing respectively Cambodia at the DiSec and Pakistan at the Security Council, where he was awarded the prize of “outstanding delegate”.

Moreover Alex is vice-president of BATNA, Sciences-Po Rennes’ MUN training association. This winter, he will attend the ScotMUN.

As the deputy for personnel, Alex will be in charge of the preparation of the topics and of the proper conduct of the discussions during the conference. Finally, he will be, with Xavier, the designer of the security council’s crisis.

Chair of the Security Council

Chair of the General Assembly