We opened up this final day of debates for SPRIMUN 2015 with a draft resolution presented by the delegation of Australia. The delegations of Cuba and Belgium underlined that this draft resolution was a “fruit of consensus,” and that they were hopeful for all of the countries present to work in cooperation. Despite the general air of contentedness with the resolution, the delegation of the USSR still raised some doubts about certain working and preamble clauses, and word choice. Because the preamble clauses cannot be changed after the working paper has been submitted as a draft resolution, the USSR presented his new proper working paper that guarded the operational clauses, but modified the preamble ones for a more diplomatic feel.

The delegation of Belgium consistently showed himself as an excellent delegate with his ability to streamline the discussion and gently remind the delegations of the topic at hand. He made many times during the comity today, suggestions to clarify positions taken by the different member states, and to clarify difficult situations. Well done Belgium! 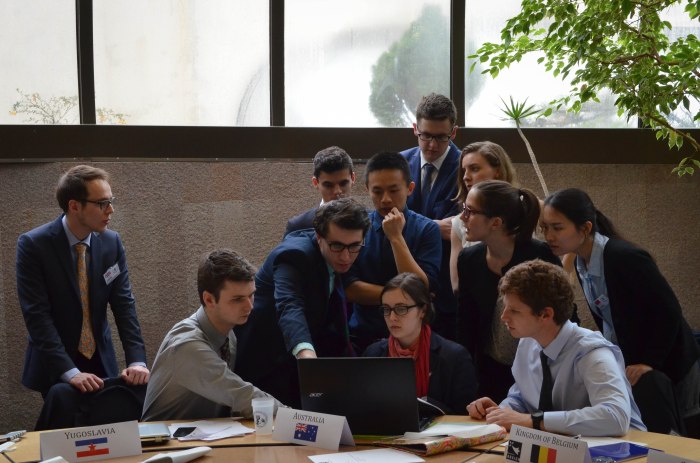 In response to the working paper submitted by the USSR, Australia submitted their working paper edited from the one before to the council. The USSR had problems with certain verbs in the preamble clauses. As well as those problems, the question was raised of whether or not to recognize and use the existing international consortium created in the previous London conference in August, even though the delegation of Egypt does not recognize such a coalition.

Stuck in a stalemate, the delegates broke for lunch.

Afterward, the historic Security Council had the surprise pleasure of a visit from the delegation for Egypt, who “Greatly appreciated our hard work, and the USSR’s concerns.” We opened up a session of questions and answers with him to get a feel for the government of Egypt’s position and motives, but ultimately were left in much the same situation as before. In a surprising and highly effective move, the delegations of Australia, Peru, and the USSR submitted a joint amendment to one of the clauses, killing two birds with one stone and winning the favors of the council. The resolution was put to vote, and passed, with flying colors! Because of our hard work, this council was done much earlier than the rest, and so we began an unmodified caucus to discuss other topics that we could discuss. Before the closing of the session we even managed to squeeze through another resolution in an unprecedented show of cooperation and speed, a, shall we say, modernization of the name of the comity DISEC, and gleefully reported the name change before the very same comity. Thank you for your hard work delegates of the Historic Security Council! And thank you for such a great experience of reporting news live with you all! 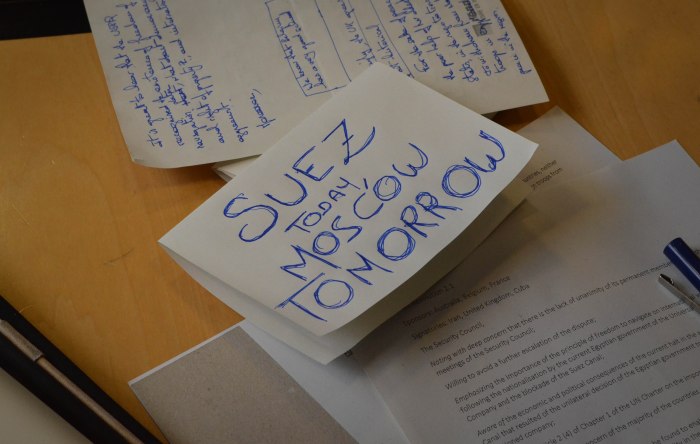 View all posts by sprimun